Our history begins in the late 1800’s. Sometime after the Shady Grove Methodist Church was built in 1885 a three acre tract of land was deeded to Shady Grove Baptist Church by a man named Peyton Hale. Mrs. Icy Alexander White, a great-niece of Peyton and a granddaughter of James S. Alexander remembers, “Uncle Peyton was a stingy ole’ cuss and Grandpa had to pay him to deed the land.” However it happened, the church is still here today.
On September 10, 1888 Shady Grove Baptist Church was organized under the direction of Bro. Henry Money. Services were shared with the Methodist church until the building was constructed and in October, 1891 Shady Grove Baptist Church was dedicated with Bro. H. B. Pender conducting the service. The original cost of the building was $336.43 and it took five years to pay off the debt. For many years the two churches were known as the ‘Twin Churches’ because they were built alike.

The seven founding families called R.D. Campbell to be the first Pastor, and Later in 1896 the first group of deacons were ordained. They were J. A. Stovall, B. M. Downing, and W. J. Morgan.

The church continued to grow through the years. The Sunday School was organized in October, 1915 and Training Union in January, 1953. The Church became full time in May, 1955.

The 50’s and 60’s brought more construction. Two new Sunday School rooms and a new auditorium were built. As in the past, the men of the church did most of the construction. The new auditorium, dedicated in March 1956 by Bro. Weldon Drake, was built with stained glass windows at a cost of $7,366.39. In August, 1960, a new wing was constructed and the parsonage was built in 1963.

Shady Grove Baptist Church continued to thrive into the new millennium. In November, 2006 the new Family Life Center was dedicated. Bro. Benny Chaffin was instrumental in its construction and was the guest speaker for the dedication service.

In January, 2007 Dr. James Ralson was called to serve as pastor.

Bro. James and his wife D’Ann lead the church to this day. In the summer of 2007, services were moved to the Family Life Center to accommodate a growing membership.

The Shady Grove staff was growing too. A Youth/Assistant Pastor position was added to better serve the younger members of the congregation.

By 2012 the Shady Grove congregation had out grown the Family Life Center. The church had to decide between conducting two worship services or expanding the facilities. The decision was made to build and in 2013 a new sanctuary along with additional parking was completed.

In 2014 the old auditorium was remodeled to serve as the Youth Building and the old Sunday school room is now Shady Grove’s radio station, ksgc 92.9 fm.

In 2015, the church added a master bedroom, a second bathroom, closet and storage to the parsonage. Shady Grove also purchased a church van and ministers by providing a way for people to come to church.

Over our 120 year history Shady Grove Baptist Church has flourished because of His goodness.

All Thanks Be Unto God! 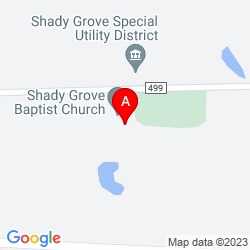